Last week, LWI officials met with Stakeholders in Jeff Davis/Acadia Parishes and Allen/Evangeline Parishes.  These update meetings were held in Jennings and Ville Platte, respectively.  This was the first time that the LWI had published to the public a draft of the Provisional Regional Geographic Boundaries.   See draft boundaries below: 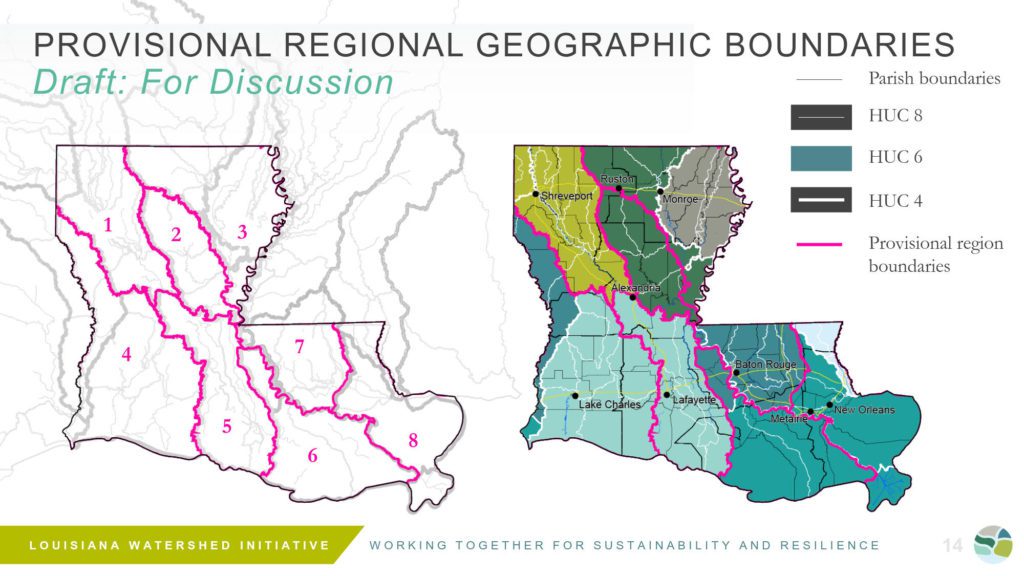 Be reminded, these are only DRAFT boundaries at this point and are not final.  That said, as you see, the Mermentau River Watershed is in Region 4 with the Calcasieu/Sabine Watersheds.  We should all consider very strongly the implications from this draft boundary.  Many of the attendees at the Jennings LWI meeting expressed that the Mermentau should have its own boundary.  Is this possible?  The LWI representatives were noncommittal.  In Ville Platte, the consensus seemed to lean towards inclusion in Region 5 (Teche/Vermilion Watersheds).  Most of the attendees of that meeting were residents of Evangeline Parish, which lies in the Acadiana Planning Commission’s (APC) region.  Additionally, given that APC has stated their intent to place gauges in the Mermentau, it could stand to reason that the Mermentau River Watershed Coalition (MRWC) should request inclusion in Region 5.  That is one position for consideration.  Another could be that, given the huge industrial expansions recently in the Calcasieu River Corridor, the financial positions in this region could be stronger and the MRWC may therefore have a higher likelihood for funding.  These scenarios are only speculative and for discussion.

Geographically-speaking, which region is most proper for the MRW’s inclusion?  Though the Gulf Intracoastal Waterway (GIWW) bisects the Louisiana coast, there are locks along the route.  The Leland Bowman and Schooner Bayou Locks are approximately 7 miles and 4 miles east of LA 82, respectively; the Catfish Locks are on the Mermentau River south of Grand Lake; and the Black Bayou Locks are on LA 384 (Big Lake Rd) south of Lake Charles.  These locks are designed to limit saltwater intrusion into the Lower Mermentau Basin and effectively create a separate hydrologic unit.  However, the system is more complex than this description, and we are constantly working to better understand it.

LWI presented their plans to create Provisional Regional Steering Committees.  These Committees will work with the State’s Council on Watershed Management and Technical Advisory Groups to “share responsibility for resilient decision-making and implementation.”

One additional issue discussed is “How can the Federal funds be used?”  There is little guidance given and much speculation.  A common discussion point which arose is that the funds will likely carry similar requirements as Hazard Mitigation Grant Program (HMGP) funds, which are very restrictive, according to those experienced in the program.

I look forward to any feedback so please provide thoughts and comments.  Up next is a visit to Rockerfeller Refuge to learn more about the proposed LA 82 Lower Mermentau Basin discharge project and the statewide Coastal Reference Monitoring System (CRMS).

Subscribe to our email list to always stay in touch with us and get the latest news about the Mermentau River Watershed Coalition.